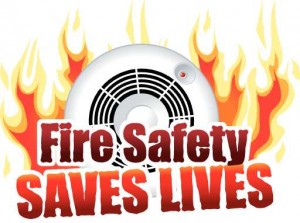 Older adults over the age of 65 are twice as likely to be killed or injured by fires compared to the population at large. By age 75, that risk increases to three times that of the general population—and to four times by age 85.

Fire safety is one of those things that few people think about until it is too late, the reason being that many people adopt a “it won’t happen to me” mentality, and sincerely believe that it won’t. But where a house fire is concerned the last thing that you want to do is to take risks, since the consequences can be disastrous. The good news is that you really do not need to spend much money to keep yourself safe in the event of a fire and by buying some simple equipment you can give yourself a lot of peace of mind.

One of the first things on the list for most people is the fire extinguisher. These are now widely available in many different models, and which should be chosen according to the type of fire you are likely to encounter. A fire extinguisher for the kitchen really is an essential since it is here that many fires break out. A fire extinguisher is not an expensive purchase and there are many places where information can be found as to how to choose the right type.

The other important thing is, of course, a fire alarm, allied with a smoke detector. This can be essential in warning you or your loved ones as soon as a fire breaks out, and this is especially important during the night. A good fire alarm may include a set of emergency lights, which should be activated when the fire breaks out and will enable you to see, even in a smoke filled environment.

Finally, thought should be given to an escape plan including buying a fire safety ladder. This will enable residents to exit the building even if the normal exit is blocked by the fire. With these three basics of fire safety installed in your home you should have a good chance of dealing with any fire outbreak properly.