Fatal Falls Have Increased 31% in 10 Years 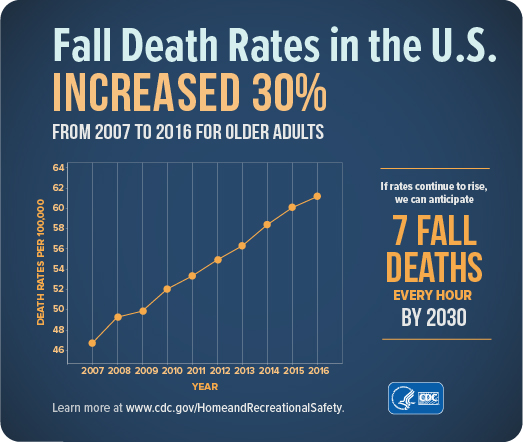 Falls are the leading cause of injury-related deaths among persons aged 65 years and older, and the age-adjusted rate of deaths from falls is increasing. The rate of deaths from falls among persons aged 65 years and older increased 31% from 2007 to 2016, increasing in 30 states and the District of Columbia, and among men and women. The study last year by the Centers for Disease Control and Prevention (CDC) also found, not surprisingly, that the risk of dying from a fall increases greatly with age. Among Americans aged 65 to 74, there were 15.6 deaths for every 100,000 people in 2016. That rate jumped to 61.4 deaths per 100,000 for people between the ages of 75 and 84, and it soared to 247.9 per 100,000 for people aged 85 and older.

The CDC researchers did not investigate the reasons fatal falls have increased among older Americans, but they point to several possible factors: reduced physical activity; people living longer with chronic diseases (which can make them more vulnerable to falls); increased use of prescription medications (which can slow down thinking and reaction time); and age-related changes in gait and balance.

The researchers recommend that physicians assess how much their older patients are at risk of falling, and then help patients address any risk factors that are modifiable — by changing the patient’s medications, for example, or encouraging the patient to engage in specific physical activities to improve gait, strength and balance.

Falls Are Serious and Costly

Outcomes of falls range from the minor cuts and bruises that anyone could expect to the worst possible results—disability and death. Overall, unfortunately, because of pre-existing health issues, lower bone and muscle strength, and other factors, falls among the elderly tend to have worse outcomes than among the general population. This leads to substantial costs both to the families of fall victims and to society at large.

Earlier this year, the United States Preventive Services Task Force reported that regular exercise was the most effective action older people could take to reduce their risk of falls.