Mirror, Mirror on the Wall 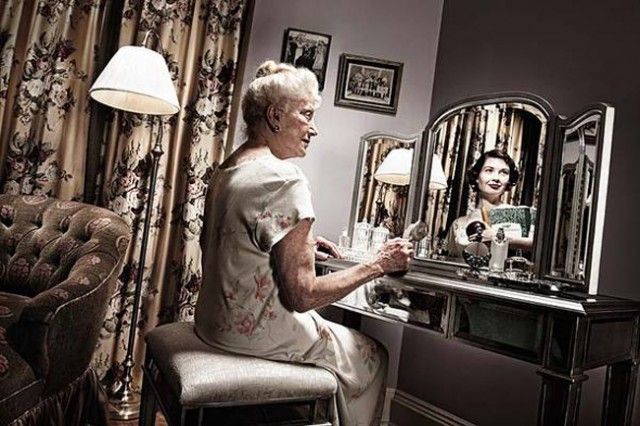 I can distinctly recall the day I looked into the mirror on the wall and spotted three distinct wrinkles on the side of my face just above my earlobe where the ear cartilage meets my face. They looked like the laps of skin found on a pug’s face and neck—cute little laps of skin that make their canine faces so very adorable. Except that this was MY face and was anything but adorable. To my utter contempt, when I turned my face to the other side, there was a matching set of wrinkles by that ear also.

By then I had been hosting “crow’s feet” for almost a decade, but had managed to rationalize them as laugh lines or something that even thirty-somethings starlets show! But pug wrinkles seemed to portend the rapid deterioration of my recognizable face—the unstoppable process of becoming my mother had started in earnest. I suffered in silent display – not particularly something I wanted to call attention to – but was completely undone. Looking back, I realize this was my first face-to-face with the inevitability of aging.

The curious part is that now years later, having surrendered to the process of aging, when I look in the mirror today, I don’t see my sixty-something face at all. Somehow in surrendering to the unavoidable and by-passing the gut-wrenching examination of every little added wrinkle, random facial hair, age spot, or sagging jowl, I’ve gone over to a new realm. Now, instead of woman “aging nicely”, what looks back at me in the mirror is the face of a sprightly forty-year old.

Don’t get me wrong, I know my age. But the face that smiles back at me in the morning is the face of years ago; I see myself younger, more youthful, more fair-skinned and radiant than my real age. Once I let go of fighting old age, I seemed to have stepped into some kind of “Twilight Zone” where all I see is the younger me!

I can relate this same phenomenon in other ways you might recognize. How many of us have gone back for a class reunion and despite the passing of decades, we spot our high school boyfriend or girlfriend and are heart-warmed that they still looks just like they did when we were “young and in love”! Classmates, haggard by decades of living, still look just the same to us and the memories are so vivid they replace reality.

Or for parents, how many of you look at your grown children and still see them as the children they were when they were in your care? My son is thirty and when I look at him, he is a hologram of all the ages he’s ever been and I see them all in his face and his manner! He will never look old to me because my memories keep him young.

I got started thinking about mirrors and how we see ourselves and others because of a conversation I overheard in the grocery line recently. The checkout clerk was complaining to a customer about issues she had with the facility providing care for her 92-year old mother suffering from dementia. Among the issues was that they, the providers, kept removing the photos the daughter was leaving of her mother’s children and grandchildren—family photos intended to give comfort and a sense of belonging to her.

Most of us know that people suffering from dementia or Alzheimer’s may begin to not recognize family, friends and loved ones. But apparently no one has explained to the family/daughter that this fear manifests also with photographs—photos which can in fact become a source of discomfort and uneasiness and uncertainty that can trigger anger, fear, worry and anxiety on the part of the person suffering from the disease. It’s not uncommon for mirrors to be completely removed or at least covered in the home of a person with Alzheimer’s because they may not even recognize themselves! What they see in the mirror may be a complete stranger and it scares them.

Today, I freely admit to embracing a younger version of myself in the mirror, but how fortunate am I that I recognize the humor and – some would say – absurdity in this feat. Counting my blessings—wrinkles, warts and wattles all!