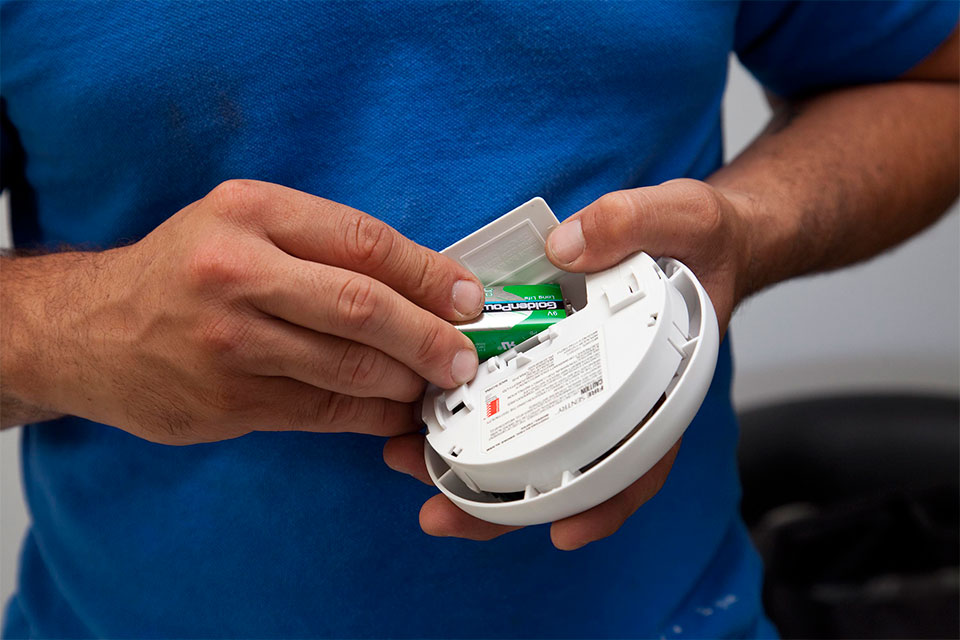 Two weeks ago something woke me from a dead sleep in the middle of the night. My dog, Abbey, a three year old Jindo-Chinook mix, heard it too. She was on half alert, ears pricked, eyes mostly open, raised on two legs—reserving the option of dropping back on her pillow with minimal effort in the event the sound didn’t merit further action. We both waited, unsure of what we’d heard.

Long seconds passed, then the harsh bleep came again. Not an intruder; not the neighbor’s teenager coming in late; nothing life threatening.

How many times has a smoke detector awakened you for no reason at all—other than to signal low battery?

I groaned, maybe cursed. Abbey looked at me as if to say, “Put your big girl pants on and deal with it, could ya?”, and then cowered in annoyance. She’s heard it before and of course, so have I. Experience, though, is no comfort when it’s the middle of the night. I’m already begrudging my too early appointment and am skeptical of a quick solution since I know the ladder in the garage isn’t quite tall enough to reach the darn thing causing all the ruckus.

I was lucky that night; Abbey and I waited it out and to my delight – and surprise – it fixed itself after about thirty minutes and the house returned to quiet without my having to do a single thing other than endure.

Drifting back to grateful sleep, I made a note to self: “Deal with the smoke detector battery tomorrow.” But when tomorrow came, I thought about the problem with the ladder and the inconvenience of trying to find someone who has a taller ladder or the intrusion of trying to find someone else to check it and essentially talked myself out of it. It fixed itself, didn’t it? What was I worrying about?

So I did. I think quite highly of my ability to problem solve and I saw no reason for this to be an exception. I got the ladder, light-weight aluminum so that part was easy. When I aligned it underneath the offending device, I already knew that standing on the top safety step, my fingers were about six inches short of reaching the alarm. Through a series of “thinking out of the box” decisions I’d rather not re-create, ten minutes later I had contrived my solution: I had replaced the flip flops I was wearing with three-inch stacked boots to give me more height and stretch; I had duct taped three large, hard-backed books to the top ladder rung to give me more height, triple-taped for maximum staying in place factor; and I was wielding a long, hefty kitchen utensil in my left hand that in the event I couldn’t actually grip the round device, I could knock it off the wall and, at least, shut it up.

I scaled the ladder and was just about to take that next step onto the highest ladder rung when it struck me. Struck me so hard I literally froze in place and then, remarkably, burst into laughter.

I was doing EXACTLY what I am paid as a speaker to warn seniors my age and older to NEVER do under any circumstances. It did not require hidden TV cameras to confirm that what I was doing was as anything but dangerous, foolish and foolhardy.

And yet, what was I feeling? Busting at the seams proud of my self-reliance would be a good start. Clever? Yes. Resourceful? Absolutely. Efficient. Very much so. Motivated, filled with purpose, having a vision, creating my own reality, working a plan, making it happen…shall I go on?

There are really two stories here: One is about smoke detectors. The batteries are going to go bad sooner or later and you need to instantly have in mind a “go-to” plan: taller ladder, lower smoke detectors, grandchild on speed dial eager to make five bucks. Here’s an invaluable link about where to put your smoke alarms, how to maintain them and when to replace them:

The other story is more complicated. We baby boomers were raised and praised to be self-reliant. It’s a badge of distinction very difficult to relinquish. But the next time you find yourself “contriving” a solution to a household problem, I would just invite you to pause…take a deep breath…and think again.

There’s no down side to surrendering household fix-it issues to someone twenty years younger. Maybe you experience a wee bit of bruised ego and have to endure some slight inconvenience, but wouldn’t you rather be around – and in one piece – to listen to your friends, family and neighbors give you a hard time about it?

Smoke alarms may be the cheapest, easiest and most effective means for protecting your family and your home from a fire – as long as they’re functioning.

According to the National Fire Protection Association, three out of four in-home fire deaths occur in homes without a working smoke alarm.

Three things you need to do: