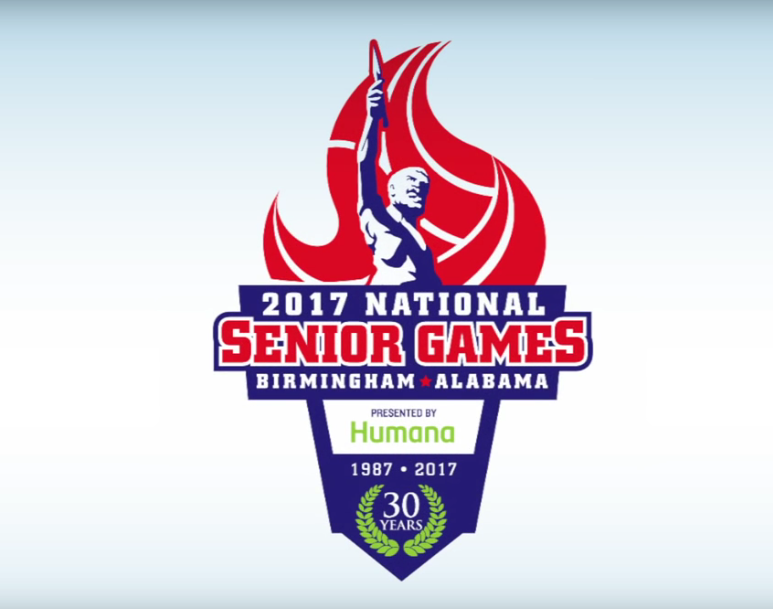 The 2017 National Senior Games Presented by Humana will be held in Birmingham, Alabama from June 2-15, 2017. It is the largest multi-sport championship event in the world for adults 50 and over, with more than 10,400 qualified athletes from every state and beyond expected to compete in 19 different medal sports.

The Games are Fun, Free and Festive. It’s great for families to come see, and rewarding to be a volunteer to help welcome the athletes from all over the U.S. and around the world. The National Senior Games Association is a non-profit Multi-Sports Council member of the United States Olympic Committee whose mission is to promote health and wellness for adults 50 and over through education, fitness and sport. NSGA sanctions qualifying games through 53 member organizations from the U.S. and Canada. The Senior Games Movement offers proof that everyone can improve the quality of their lives at any age by staying active.

By 2020 the U.S. population over 65 will nearly triple from 2012 numbers. This creates unprecedented challenges to health care and aging services. It is imperative to promote healthy and active lifestyles for seniors. People who participate in local, state and National Senior Games demonstrate their “Personal Best” not only in competition, but also in their ongoing quest to remain active and healthy. Their example challenges all ages to “Be YOUR Personal Best…For LIFE!”

Warren W. Blaney, a Los Angeles businessman, is widely recognized as the founder of the Senior Games Movement. Blaney, a track and field athlete in his youth, entered one of the track events for adult athletes that were springing up, in part due to the jogging craze triggered by Dr. Kenneth Cooper’s influential best-selling book Aerobics. The experience inspired Blaney to dream of an Olympic-style multi-sports event for older athletes. In 1969, he founded a nonprofit organization and secured the help of the Helms Athletic Foundation and the Los Angeles Times. A year later, Blaney staged the first “Senior Olympix” in Los Angeles.

From there, the movement spread from California to other states. The first recurring games began in 1975 in Sanford, Florida, which are still being held annually 42 years later. By the mid-1980s, 33 multi- sport games for seniors had been established around the country.

In 1985, an effort was launched in St. Louis to create a national competition event, led by Harris Frank and Ken Marshall. Seven men and women formed the original leadership for what was initially known as the National Senior Olympics Organization (NSOO). In the fall of 1985, they hosted a meeting of individuals who were currently conducting games for seniors in their states. That group planned the first National Senior Olympic Games, held in 1987 in St. Louis.

The first games were a great success involving more than 2,500 competitors in 15 sports. The NSOO was formalized during the games – with a Board of Directors elected, articles of incorporation filed in the State of Missouri, and bylaws adopted. An estimated 100,000 spectators viewed the first Games ceremonies featuring Bob Hope at the St. Louis Riverfront Arch.

The second Games also took place in St. Louis in 1989, hosting 3,400 senior athletes. The event received significant national media coverage by the New York Times, ESPN and ABC’s Good Morning America. After this second success, The Games began to move to a different city every two years to stimulate more awareness and participation around the country.

NSGA moved its corporate office from St. Louis to Baton Rouge, LA, in 1997. The organization now includes 53 member qualifying games in every state, the District of Columbia, Canada Games and The National Veterans Golden Age Games. Since 2007, Humana has supported the biennial event as Presenting Sponsor, underscoring its commitment to advocate healthy, active aging and wellness.

The non-profit organization is dedicated to not only stage quality games for seniors, but to also put its Mission Statement into action: “To promote health and wellness for adults 50 and over through fitness, education and sport.” There is now an affiliated NSGA Foundation, and NSGA has a full-time Health and Wellness Manager on staff to advance the mission. Today, the National Senior Games has grown to one of the largest multi-sport events in the world.